the Clean Energy Global booth at IAA brought us many new contacts to established companies and especially startups with vehicles in the L7e to M1 segment – the overall interest in smart swap batteries is very high. This gives us good evidence of a product market fit. During the follow-up, we found that for many contacts, in-house development makes little sense, but rather building on a developed technology. Our concept of Battery-as-a-Service with the smaller Clean Energy Pack mono exchangeable battery packs for manual swapping, as well as Clean Energy Link IoT module and Clean Energy Net Battery Cloud then also fits in with this. In addition, we can score with a temperature control of the battery packs registered with the patent office, which has a competitive advantage especially with the contact plates with liquid cooling or heating. A pure plastic housing for the battery pack is not possible due to poor heat dissipation and conduction and largely rules out 48-volt use for the above-mentioned vehicle segments. 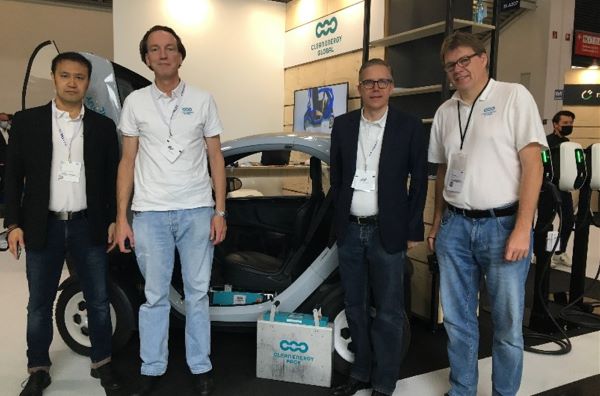 Large battery swap stations for electric cars and electric delivery vans are being heavily promoted in China at the moment and are being pursued as an option by more and more automakers. Chinese premium brand NIO had already launched its new NIO Power Swap Station 2.0 in April and plans to build about 4,000 battery swap stations by 2025, up from 600 so far. In September, Geely announced plans to build a total of 5,000 of its own swap stations by 2025. These will achieve a changeover time of around 1 minute for large exchangeable batteries. BAIC, the previous market leader for the use of battery swap stations, which equips the cab fleet in Beijing with them, has been able to bring numerous other Chinese automakers on board via Blue Park Smart Energy (BPSE). The state-owned oil company Sinopec and the state-owned grid supplier Chinese Stategrid are also interested in investing in swap stations. We expect that German automakers will also be interested in the topic when NIO enters the German market in 2022 at the latest. We are ready to support them with our flexible approach of a modular scalable system as the next generation, which can be adapted to different module sizes. Independently of this, however, our focus after successful financing is first on converting gasoline or diesel existing vehicles to CEG exchangeable drawers and exchangeable battery modules, which ensures faster market access.

With best regards from Berlin,